With an average of 15meters of snow falling annually Niseko is regarded as one of the snowiest international ski resorts in the world. From late November to May the village is covered with snow and buzzing with an array of both International and Japanese snow enthusiasts.Forbes crowned Niseko one of the Top 10 International ski resorts in 2008 and just recently National Geographic voted Niseko as the best powder snow resort in the world, read more here. 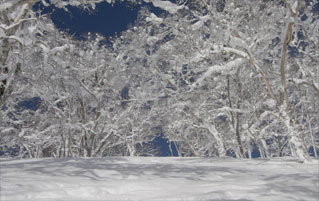 The Niseko accumulative snowfall was over 12 meters for the season according to 360Niseko snow reports. November saw the season start with just over 1.3 meters of snow while December brought the total up to 4 meters with over 2.8 meters being dumped during the month. It wasn’t until January when Niseko really showed us how much snow we really get, as just under 5 meters was recorded with more than 25 consistent days of snowfall.

February received a slightly disappointing 1.8m however it was March and April that was a big surprise bringing a collective 1.2 meters making it the one of the best springs we have seen in a while. 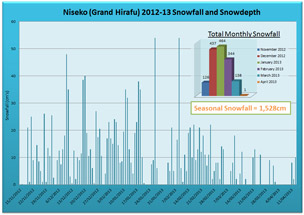 Towards the end January and heading into February we saw many blue bird days, which allowed Mt Yotei to be seen in all its glory. Those lucky enough to be here during that time definitely took in the breath taking views and shred the mountain with Yotei watching from the forefront. The month of February saw just over 3 metres with the bulk of snow falling from the 9th Feb. Heading into March the saw more blue birds and only small amount of snow fall as spring came early this year. Overall, this season has dumped 15.3 meters. 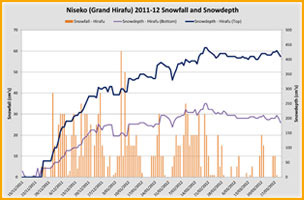 November started the ski season with over 120cm of snow. December claimed ‘best month’, as over 5 metres of world’s best powder was dumped. Christmas Day and Boxing Day had the biggest dump, accumulating over 50cm of ‘pow’ together. Statistics show an average daily fall of 13.5cm in December with only 10days being recorded without snow. January and February accumulated over 3.5 meters each with March delivering only 94cm. However together the total snowfall for this season was just over 14 meters!!

Putting this information into perspective and comparing it against other famous ski resorts worldwide, Niseko recorded the highest snowfall with over 10 metres in 3 months with St Anton coming in second, Mt Baker and Whistler coming next and Alta coming in at just over 4 metres. The graph shows a clarifying picture of just how profound the snowfall was in our little winter wonderland. 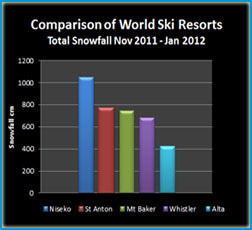 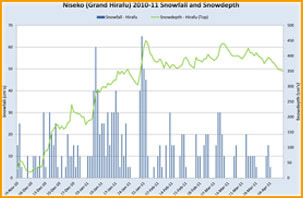 This season was great with an average of 15 meters. November was disappointing and early December wasn’t much better. However mid-December delivered continuous snowfall which was constant throughout January. February was good for the first few weeks until the temperature increased and the rain started. It wasn’t until March that the snow began again and was on-and-off throughout the month.